Procrastination pie: A lesson in avoiding the really hard work

I got angry at my son yesterday.

He was supposed to be practicing piano, but he was crying and upset because the piece was difficult. This was not the first time he has experienced this level of frustration with working through something hard. We've tried to coach him through the difficulty, explaining that when something is hard, you just have to work harder. Hardness is not a reflection on intelligence or value; it simply means that something is difficult and requires more work.

I tried going that route first. I told him to take a deep breath and try to slowly work through the lines note by note. Calmly, persistently. He responded with more frustration and tears. I tried again. And then I'm ashamed to say I totally lost it. I yelled. I told him he needed to pull himself together and get over being so emotional about struggling. It went on from there. It wasn't pretty, and I didn't feel good about it afterward.

Thinking about the incident while doing dishes later, I recognized my hypocrisy. I had spent much of an unexpected snow day avoiding my own hard things. Instead of painting or writing or even working on a project for a client, I cooked and cleaned and ran 4 miles and folded laundry, frittering away precious time on easy things. Not easy in terms of the amount of work required, I was exhausted when the day was over, but easy in terms of emotional, mental, and creative effort. Like my son, I constantly struggle with and get anxious about doing certain kinds of work; the difference is that I am a lot better at hiding it from myself and others by doing prodigious amounts of other stuff.

I try to tell myself that being creative is not supposed to be that hard, that I shouldn't get frustrated, that I should take a breath and slowly and persistently push through the difficulty, and perhaps that I should even relax and enjoy it, but the truth is every time I start putting paint to canvas or trying to write a story is a moment of stress, anxiety, and fear. And even when it goes well (which is actually pretty frequent), the terror returns and remains because the next addition of color, the next creative choice could screw it all to hell. I tell myself I shouldn't care. It should be about the process, not the product, but at heart I don't believe that. I tell myself that if I really loved to paint as much as I think I do, it should be easy to get up and do it. But it's not. Just because you love something doesn't make it easy. So painting starts sit for months and sometimes years before I finish them because mustering the courage to push them through the next step is so hard and requires so much emotional energy. (For example, I started Little Bird, the painting at the beginning of this post, five or six years ago and only finally got around to finishing it last September.)

Starting this year, I plan to do better. (I also plan to be more understanding toward my boy.) I've figured out ways to trick myself into running even when it's cold or hot as hell, I'm sore and tired, and I really don't feel like it. Surely I can trick myself into painting and writing more?

In the meantime, while I was avoiding the hard work, I made this shepherd's pie, which turned out to be a huge hit. Inspired by my friend Jeff, who made a shepherd's pie using cauliflower mash instead of mashed potatoes a few weeks ago, I decided to try replacing some of the mashed potatoes with cauliflower. The cauliflower adds a nice, light sweetness to the mash, but is a bit more watery than potatoes are. I may try replacing the potatoes with cauliflower altogether sometime soon, but if/when I do, I will probably need at least two heads of cauliflower and less half and half. I also used a combination of ground beef and loose pork sausage, but you can use any combination you like. And even though I made this meal in part to avoid work, don't be fooled: It's a somewhat time- and labor-intensive recipe, so don't plan to make it on a weeknight. (Unless you have a snow day.) 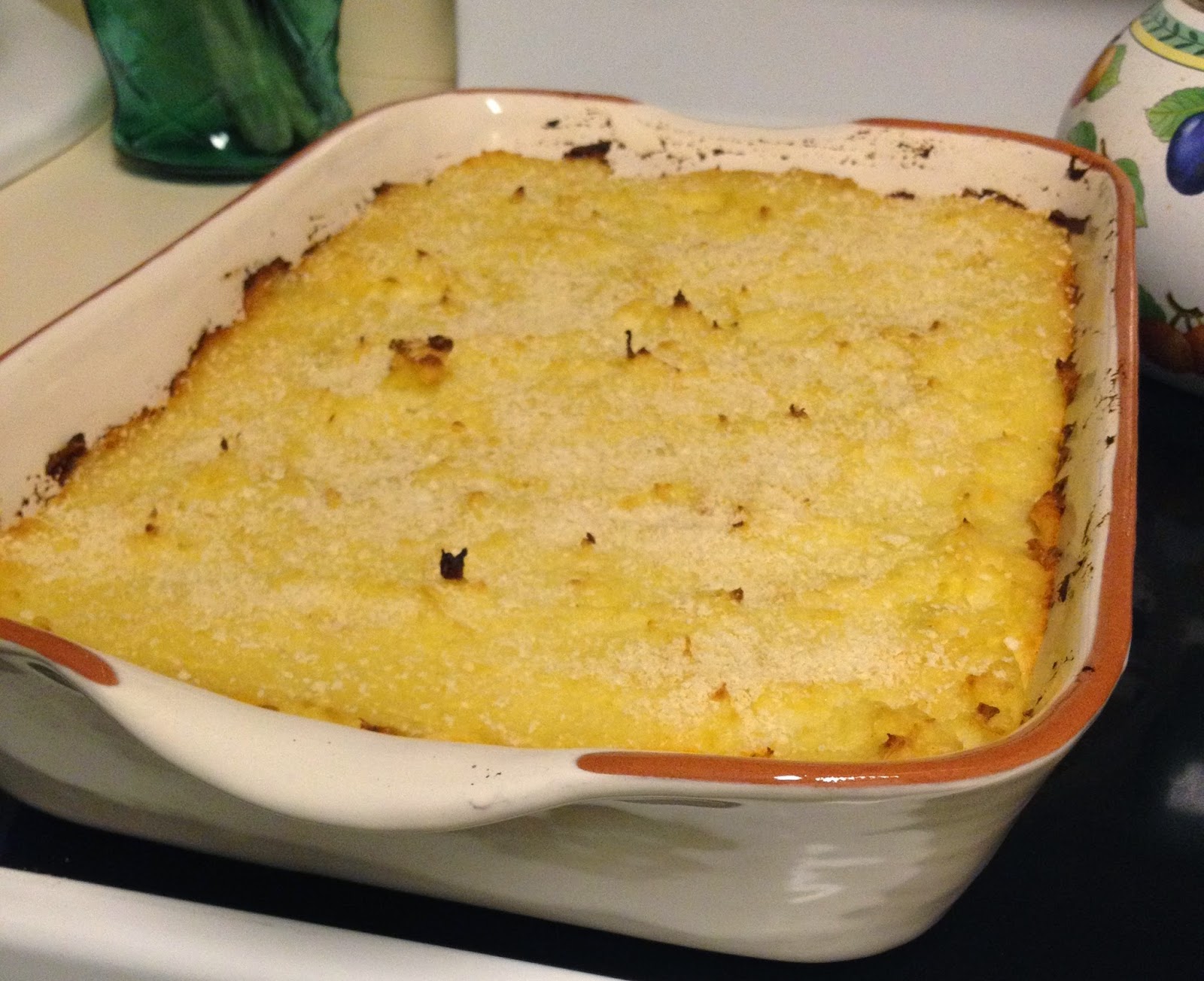