Swedish meatballs: A classic dish for the Grand Tour 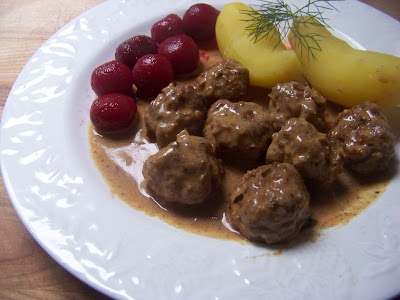 Because this Friday is Midsummer Night's Eve in Sweden, I decided this week would be a great time to teach and learn more about Sweden during my son's and my Grand Tour summer project. Obviously I know a lot about Sweden, having spent much of my childhood and some early adulthood there, but it's always valuable to approach your own country or city as though you were a tourist and knew nothing about the place. You can often learn things that you never knew before. And it can be a lot of fun. 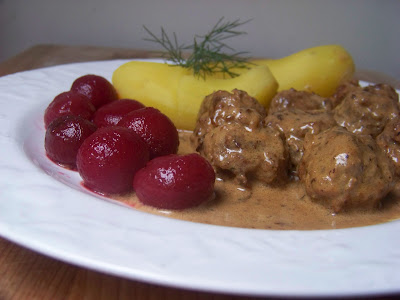 So I started doing some planning and research, trying to figure out what to serve for Midsummer, but also what we were going to eat throughout the week. Swedish meatballs were one obvious choice (who doesn't think of Swedish meatballs when they hear the words "Swedish food"?).

Now, Swedish meatballs is one of those dishes that every cook does in his or her own way. Similarities exist among them all (they are all recognizably Swedish meatballs), but each recipe has its own tweak. In some cases, meatballs are served with a creamy brown sauce, as I have done here. Some people prefer a thin beef broth with some chopped onions. And sometimes the meatballs aren't served with any kind of sauce at all, which is usually the case at a smorgasbord (cleaner to snag one with a toothpick that way).

And the accompaniments vary a bit as well. Boiled potatoes are definitely typical. (By the way, I learned a nice tip about adding dill to the cooking water from this Swedish food blog.) Many serve their meatballs with lingonberry sauce, which is very good. But I usually prefer to serve mine either with pickled beets or with Swedish cucumber salad. The acidity of the pickles combines so well with the richness of the sauce.

Most Swedish meatball recipes start with a mix of ground beef and ground pork, but I don't see any reason to get too hung up on that. If you've only got some ground beef, use that. Heck, I am sure that the addition of ground lamb would be tasty too. 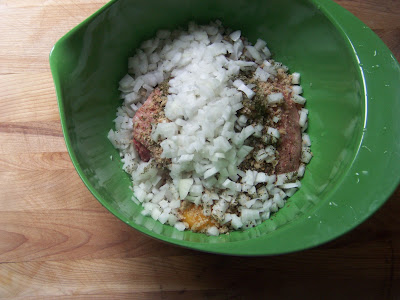 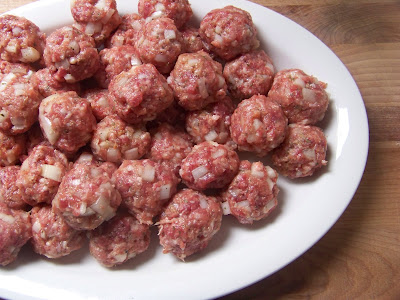