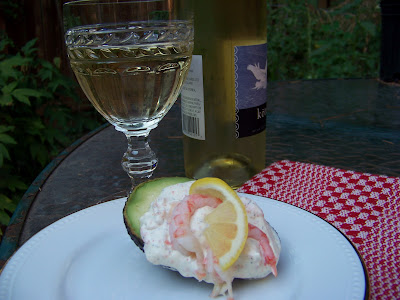 It's Saturday night as I write this. It's been a busy week: I've been buried in a project that has gone on for nearly a year, which I finally completed on Friday night. On top of that, I spent much of last week in a daze (or an amped-out crazy fit) because I injured my shoulder rather severely last week and have had to take painkillers and steroids to cope with the pain and inflammation. It's been a long time since things were going in the right direction.

Even this week's #SundaySupper event seemed daunting. This week is a special wine event, in which we are working with Schlossadler International Wines, a wine distributor with a popular international wine club that sends you a selection of wines right to your home. I was one of the members of the #SundaySupper group who was chosen to get wines sent right to my door as part of this week's event. Me. Getting a free box of wine to blog about. Sounds fantastic, doesn't it? And to be honest, I was incredibly flattered and excited when I was chosen. But then the reality of the week set in, and I realized I had made this commitment, and I was damn well going to do it, but I wasn't looking forward to it, and I was tired and hurting, and wa, wa, wa.

Then things began to turn around a bit. On Wednesday, I got the box with three lovely bottles nested inside and a fun little logo on the inside cover. Just getting the box was exciting. A happy, special treat in the middle of a tough and dreary week. 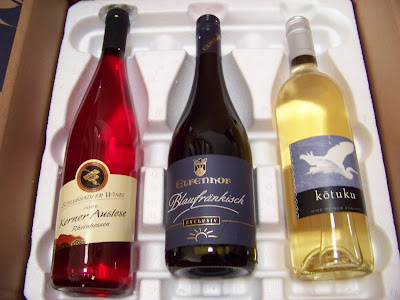 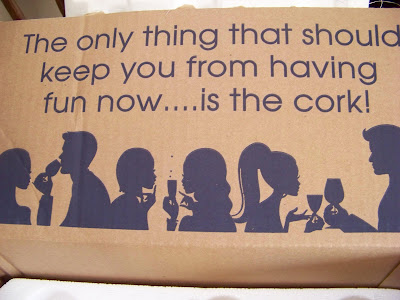 Then came Thursday. I churned through more work, trying to hit some milestones before quitting for the day, taking my little boy to the park for a while, and dealing with shoulder pain and meds crazies, and trying to look forward to making the food I had committed to make for dinner, because we had invited one of our best friends, Dave, over to join our dinner and our wine tasting that evening. By five, I felt awful and miserably exhausted, again. It was ridiculous. But I kept going. I was going to power through this and have fun dammit! I cleaned the shrimp, made the mayo, made the Skagen salad, halved the avocados, and tried to get some decent pictures of my dish. But the salad slid off the top of the avocado halves, while I grumbled about my bad pictures, and Mike joked about me complaining that my food wasn't photogenic enough. (I suspect there's a lot of kind of thing in food-blogging households.) 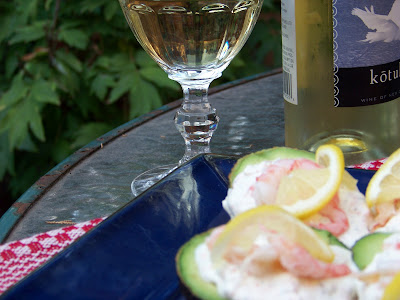 Then we popped open the first bottle of wine, the 2010 Kotuku Sauvignon Blanc, poured some glasses (a small one for me; I didn't want to mess around much with mixing wine and strong medication), and dug into our avocado halves with shrimp Skagen salad and relaxed. Settled into a pleasant evening with great friends, some terrific food, and a great wine, and started to slough off some hard days and enjoy some of the best things about living. What had been a very tough week turned around and became a genuinely pleasant experience. The wine was crisp and refreshing and went well with the shrimp Skagen salad and avocado.

After dinner, we decided to try one of the other wines, the 2006 H.O. Becker, Kerner Auslese, which comes in a rather wildly pinkish-red bottle, but turns out to be white. According to the flier that came with the wines, it's a cross between a Riesling and a grape named Trollinger. (Also according to the flier, it's a "Jacuzzi" wine, a phrase that makes me shudder.) I typically love Rieslings, but most I have had are on the dry side. This particular wine had a beautiful flavor, but was a bit too sweet for my taste (I could easily imagine reducing it to a syrup to drizzle on something). The flier suggested pairing it with mixed greens, balsamic strawberry vinaigrette, and Stilton cheese, so I got some Stilton out of the refrigerator (which I had purchased with just this eventuality in mind), and we had a post-dinner snack of Stilton and wine. The salt of the cheese was just what was needed for the sweetness of the wine.

And now we come to tonight, when I felt obligated to try that last bottle of wine, the 2010  Ernst Holler, Blaufrankisch, with a dinner of turkey breast sauteed with smoked paprika and a side of creamed corn, both fresh from this morning's farmers market, and I was delighted. This was definitely my favorite of the group: The color is extraordinarily deep, dark, and beautiful (I am sure I have mentioned I've got a thing for color before, right?), and the flavor is just a little spicy and a little smoky and gets better and more complex as it stands in your glass.

And so in the end, this box of wines turned a crummy week into a week of trying new things, of pairing foods with wines, of elevating the everyday (and certainly the lousy day) and making life a little more special. And this may be the lesson I have to learn from this week: You may have to go above and beyond to make life special and worthwhile, but if you don't, what's the point? It's all just drudgery if you don't. At any rate, I want to thank the people at Schlossadler for turning my week around.

The recipe for Shrimp Skagen salad is incredibly easy and very festive. It's a typical Swedish party dish and can be served on toast, in a baked potato, or in an avocado half as I did here (the creaminess of the avocado is especially rich and wonderful with the creaminess of this salad). (Like the Skagen toast recipe I made for Swedish midsummer a few months ago, you can find most of the ingredients at IKEA; I know it's not local, but in this case, it seems kind of necessary.) The recipe for the dish follows, but don't forget to skip to the end of this post to find the whole list of great food and wine slated for this week's #SundaySupper. Also, there's a special discount for free shipping for anyone who wants to join Schlossadler's wine club. 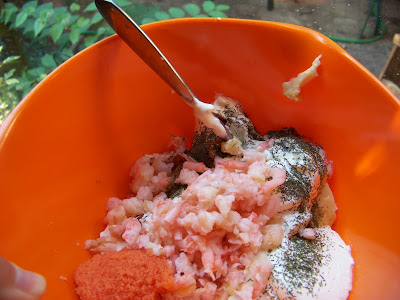 Mix the shrimp, mayonnaise, sour cream, dill, and herring roe in a bowl. Chill for an hour to let the flavors come together. Top the avocado halves with a tablespoon or two of the mixture and garnish with thin lemon slices.
Now, grab a glass of wine and join this week’s special #SundaySupper wine event. Here are some of the great recipes featured during this event, and don't forget to follow the hashtag #SundaySupper on Twitter at 7:00 p.m. Eastern time.
But the fabulous recipes don’t stop there, there are more amazing recipes to pair with these fabulous wines:
Wine Pairings by  ENOFYLZ

Join us at 7pm ET for our #SundaySupper Chat with @schlossiwines. Follow along on twitter by using hashtag #Sundaysupper or using Tweetchat.  We love to feature your recipes on our #sundaysupper pinterest board and share them with all our followers.
We have a special discount for all participants: Free Shipping when you join The Wine Club by Schlossadler Wines use code FFSS1.
Next Shipment is October 2012 ~ Halloween Day  Ghostly Whites, Haunted Red for all friendly spirits everywhere.
Follow Schlossadler Wines:
Twitter @schlossiwines
Facebook Schlossadler International wines
Website: www.schlossadler.com
Posted by Tora Estep at 5:02 AM