Some friends of ours came up from Richmond to have dinner with us on Saturday night. Of course, somehow we missed the memo that we were cooking dinner until Saturday morning, when we discovered this and became a tad anxious. Thankfully we still had a freezer full of meat (thanks to the Haskins Family Farm CSA we signed up for this year), so I decided to take a gamble and grill a nice piece of pork butt (which is actually the shoulder, but "pork butt" elicits more giggles) that was taking up a lot of space in the freezer and shred it for tacos. That way we could probably keep the kids happier than they would have been with some of my more esoteric meals.

But before I get too far into the details of making that dinner (which finally took place about two hours later than planned), I just have to mention this recipe for eggs poached in buttery sorrel sauce, which we had for dinner tonight and was absolutely wonderful. Thanks to Orangette for turning me on to it. 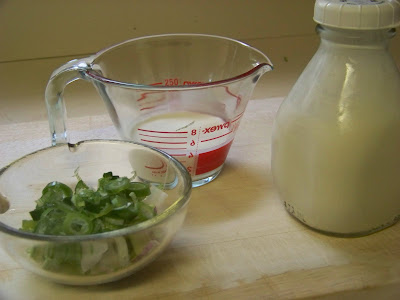 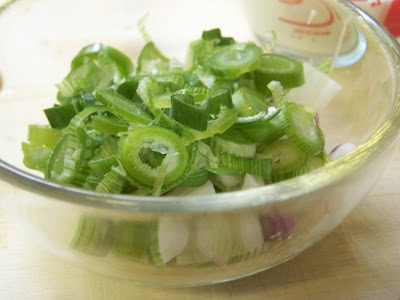 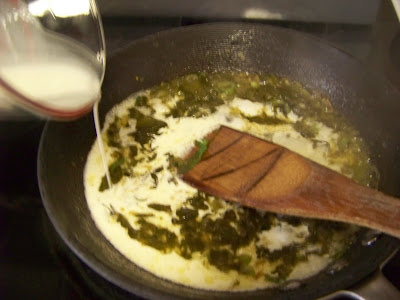 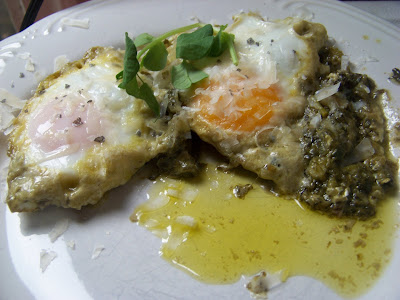 Anyway, back to the pork butt adventure, which at first seemed like it was going to be a fiasco, but turned out reasonably well in the end.

So, I had dinner to make out of a five-pound hunk of meat that needed to be defrosted and marinated and then grilled for at least three hours (or so I thought). I decided to take a chance and marinate the meat while it was defrosting. I made a marinade of


I mixed the ingredients together, placed the frozen pork butt in a plastic bag, and poured the marinade over it. I sealed the bag, pushing as much air out of the bag as possible, and then submerged the whole bag in cold water to try to speed defrosting. While it marinated, I turned it over a few times. I let it sit for about three hours (wish I had thought of it a lot earlier, an overnight soak would have been fantastic).
At about three in the afternoon, I decided I had to start the grill or we were never going to have dinner. In another first, I decided to try my new chimney starter to start the fire. I wasn't sure if it was really going to work at first. It kicked up a LOT of smoke, but soon the coals glowed nicely, so I was happy.
While the coals were heating up, I prepared the meat, which was still quite hard and cold, but I had to give it a try. I got the meat out of the bag (reserving the marinade), dried it off with some paper towels, and then rubbed it with a dry rub that I had left over from last summer (dry rubs usually include sugar, salt, dried mustard, cumin, and other dry spices).
Back at the grill, I poured the coals from the chimney starter into one half of my grill. (When you grill a large piece of meat, you use indirect heat, which means that if you have a coal-fired grill like I do, you place all the coals on one side, place the meat on the other side, and close the grill to basically create an oven.) Then I put the grate down, oiled it with some canola oil, and placed the meat on the grill, skin-side up.
When the meat was on the grill, I decided to take a quick peak at my copy of Steve Raichlen's BBQ USA to get a sense of how much time I was looking at and how frequently I would need to add coals to maintain the heat in the grill. Of course, imagine my shock when he says that it's going to take four to seven hours, and our friends are expecting dinner in three. Oh dear. Well, hopefully it would be good enough to make up for the wait.
In the meantime, I made a mild salsa with cherry tomatoes (organic from Florida, closest to home I can find right now), some local strawberries, a little spring onion, a sprinkle of salt, and a splash of red wine vinegar. 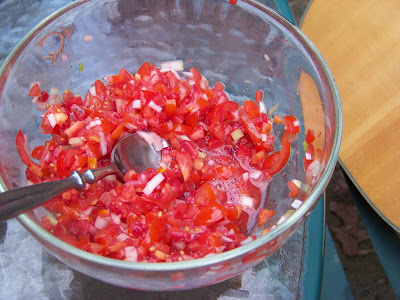 After about an hour on the grill, I added 12 coals to the fire per Raichlen's instructions, but I wasn't thrilled with how low the fire had gotten in that hour, so I decided to add fewer coals more frequently (about six every half hour) to maintain the heat. (When you add coals, you want to leave the top off the grill for about five minutes to make sure they light up.) I also mopped the meat with the reserved marinade, which I had boiled for about five minutes to kill any bacteria that may have developed during the marinade.
And so it went. For about four hours, I added coals every half hour, mopped the meat with marinade, and anxiously watched the thermometer (I had pushed our meat thermometer into the thickest part of the meat and was aiming for 160 degrees). I knew I wasn't going to get meat that was falling-off-the-bone tender in the time frame that I had, but I sure as hell wasn't going to serve my friends undercooked meat. 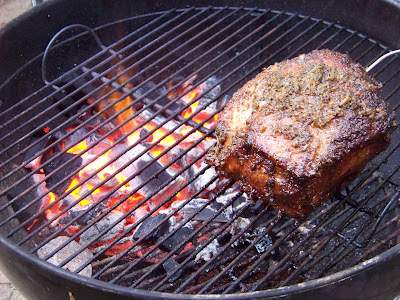 It was a long wait. Dinner didn't happen until about eight (half an hour past my four-year-old's bedtime). We had to feed the kids peanut butter sandwiches to tide them over. When dinner did finally happen, I set the candles on the table on fire, so things got a little chaotic but thankfully the house didn't burn down. But the tacos were delicious. The meat was incredibly flavorful, the salsa was juicy, tangy, and fresh. I'll definitely make it again, but next time I will start much, much earlier.
Posted by Tora Estep at 5:57 PM