I am so over winter food!

I am so bored with food right now. When you eat seasonally, transitioning between seasons is always hard, but this time of year is particularly dreary. You are tired of eating frozen berries and mealy apples, but you know you need to clear out the freezer for all the good new stuff that will come. A few wrinkly sweet potatoes and rock-hard squash (what were those called again, celebration squash?) loiter at the bottom of the veggie basket, up to no good with some wayward onion skins. Most sellers at the winter farmer's market in Leesburg seem tired or bored, waiting for the release of spring and summer, oh sweet explosive gorgeous summer. When Mike says he was hoping to see some vegetables, one seller calls out, "No, won't be any vegetables until the end of the month." Haven't seen the carrot guy with his sweet little jewel-bright roots in weeks. The eggs are gorgeous with their perky, deep orange yolks and becoming increasingly abundant, but I feel as though my capacity to come up with things to do with them is waning along with the variety of foods available to me. I look around at the market, I see cupcakes, goat milk soap, honey, and lots of meats--all good stuff--but somehow much has lost its luster.

So what then? I guess I need to kick it in gear, get inspired, get  creative--try things that I might never try otherwise. Dig out the stuff from the back of the freezer and come up with a way to make it interesting (and good, of course). Try something I haven't done before. I've been toying with the idea of making noodles or pasta for a long time. Maybe now would be a good time for that. Maybe I need to learn to make a different bread (I make most of the bread we eat; when we first tried to eat locally and without a lot of industrial ingredients, we discovered quickly that most commercial bread is chock full of weirdness). I tried making sourdough once and failed sadly (tough stuff--should have used it for insulation or in place of concrete barriers), and I've been meaning to try again with another recipe, but I haven't gotten around to it yet.

What I have tried to do recently is to institute Meatless Mondays and to start eating more fish. What both of these attempts have taught me is that I know less about some kinds of food and cooking than I thought. Creating vegetarian meals is hard because they frequently lack a centerpiece; it all seems like sides. They are often complex, too. I started my Meatless Monday career with a great pizza, but it was a fussier recipe than I typically do on a weeknight. (I will be using the pizza dough recipe again, however.)

And, despite my Nordic heritage, I am not much of a fish eater or cook. So far I have made one fish recipe that I like (the recipe is at the end of this post), which is a traditional Swedish dish that, believe it or not, I used to eat in grade school and like (unlike fish balls--gag--or blood pudding--gag even worse). In Swedish it's called mandelfisk, which translates into almond fish, and it's just a nice yummy, breaded fish with nuts (and lots of butter). I like to eat it with boiled Yukon Gold potatoes (or any other nice, buttery yellow-skinned potato) with some melted butter and parsley and some grated carrots, perhaps with a squeeze of lemon or a dash of vinegar. Simple, clean tastes that bring up memories of better times as a kid in Sweden. Like when I spent a week on my aunt and uncle's boat in the Stockholm archipelago, eating a fresh fish stew with butter melting into rings in it ("leaden circles dissolved in the air"), giggling with my cousin while rosy, hot-faced, and sweetly tired from a long day in the sun and wind. 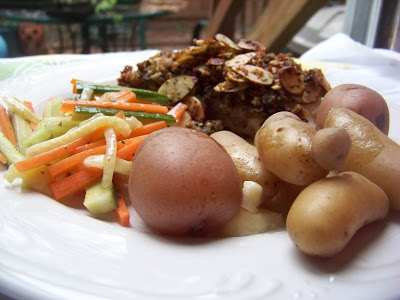 Mandelfisk
4 small files of white-fleshed, flaky fish (I use Chesapeake rockfish, because it's the one fish that I know I can get locally; it's a little strong, but still very tasty)
4 Tbsp butter
1 cup breadcrumbs (fresh preferably, which are really easy to make if you have a food processor: just throw some chunks of fresh bread in and whir it up until it's fine)
1/2 cup flaked almonds (or if you've got whole almonds, you can just chop them, which I discovered in a pinch)
a bunch of fresh parsley, chopped (if you have it); if not, use a Tbsp dried
1 clove garlic, chopped or crushed