Mike brought dry ice home from the lab. He does that sometimes. We throw it into bowls of colored water to create lots of smoke, blow up plastic bags, generally mess around. Tonight Mike and Sebastian came home with a plan: They were going to make ice cream.

I was in the kitchen when they came barreling through the door with a cooler of dry ice. Sebastian (four) charged into the kitchen, "Mommy, we are going to do an experiment. We are going to make ice cream!" "Oh," I said. Their plan was to use milk with some peppermint extract. I suggested using the chocolate milk I forgot to drink this week. (We get one bottle of chocolate milk a month from South Mountain Creamery and split it. It tastes just like melted ice cream so I thought it might good to turn into ice cream.)

Out came the blender. Into it went chocolate milk and peppermint extract. On went the blender, and into the mixture went pieces of dry ice. Then came the mess as the combination of dry ice and rotating blade created a mass of foam that went everywhere. 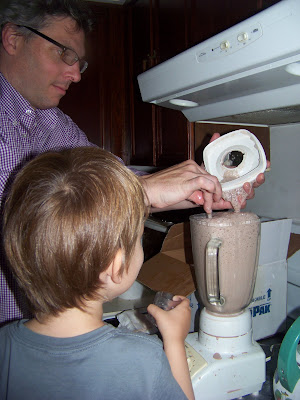 Too much dry ice too quickly. So they had to slow down how fast they were adding it. 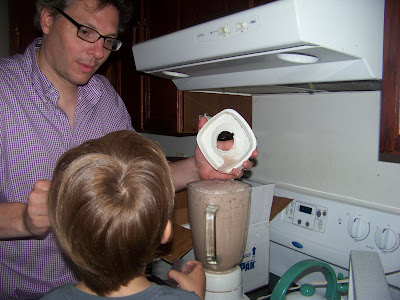 First taste, and Mike couldn't stand it. Sebastian, of course, loved it. But it wasn't getting cold fast enough. So Mike tossed in a couple of teaspoons cocoa and many tablespoons sugar and start it going again. It got cold, but it wasn't freezing, which surprised us all. 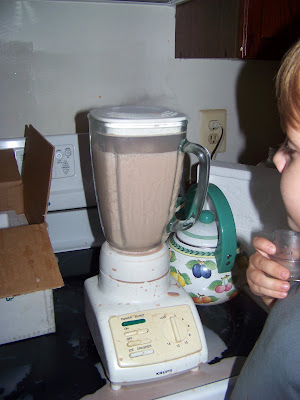 But it made many big messes, as dry ice went in and created an explosion of bubbles that poured out the top of the blender and over the counter. Finally, resigned to the disaster and hoping for something ice-cream-like before Sebastian's bedtime, I suggested that it might freeze better in the stand mixer. The mixture went into the bowl, and we set it up to go. 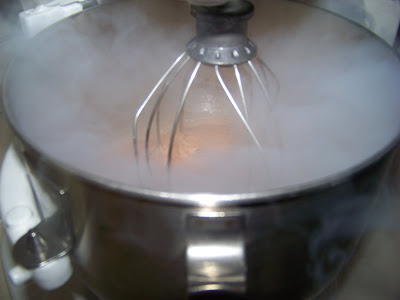 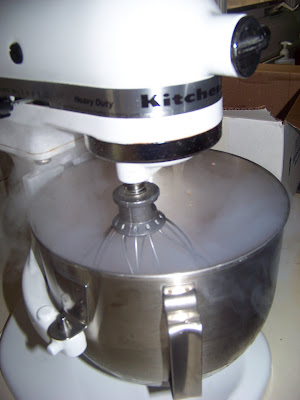 We turned the machine up a few notches, but when we had it up too high, bits of dry ice would fly out of the bowl. So we slowed it down and added the rest of the dry ice to the mixture. 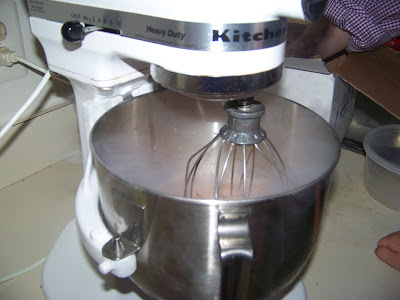 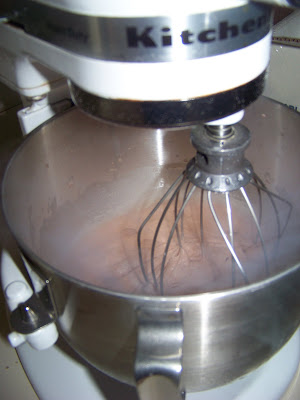 Finally, the mixture grew thicker and more solid. The bowl of the machine became extremely cold. We stopped the machine to scrape down the sides, where the mixture had become nearly solid and chunks of dry ice remained. We mixed some more. 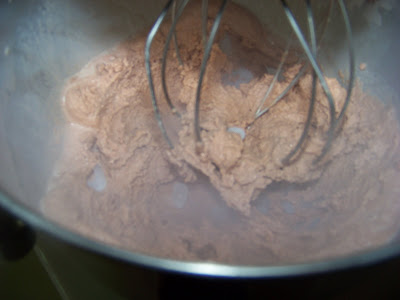 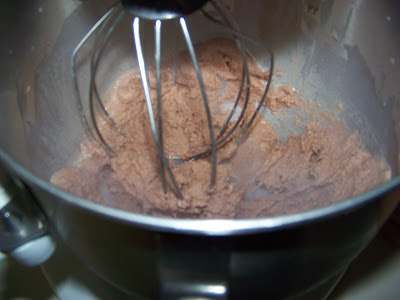 We doled it out into three bowls and ate it right then and there. It was awful. Chunks of dry ice were left in the mix (Mike got one in his mouth, which made his teeth feel spongy). The dry ice had created an unpleasant texture like frozen carbonation. The flavor was really weird, dominated by strong peppermint and without a lot of body.

Nonetheless we ate it all, Sebastian with more gusto than Mike or me, but he's into the sweet stuff. It was the worst ice cream I have ever eaten, but probably the most memorable ice cream experience I have ever had.