So. I did it. You know, the experiment? With the limes and the peaches and the cake and whatnot that I mentioned I wanted to try yesterday? Yeah, I made a lime-peach upside-down cake, and as you will see, the experience had its ups and downs.

So I started with my go-to recipe for all the upside-down cakes I make and then made some modifications. 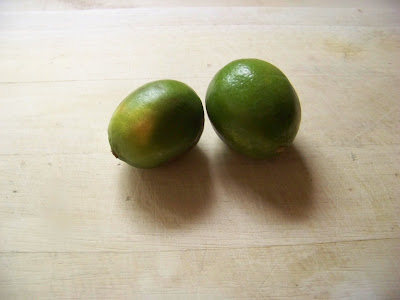 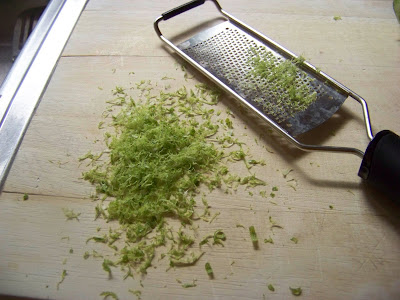 I melted six tablespoons of butter in my cast-iron skillet slowly over low heat. 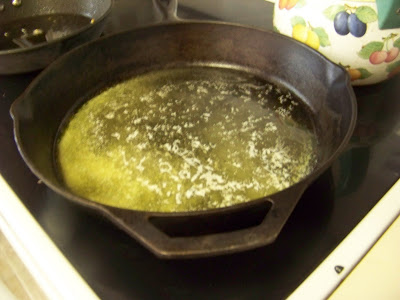 I added a cup of brown sugar to the butter in the pan. 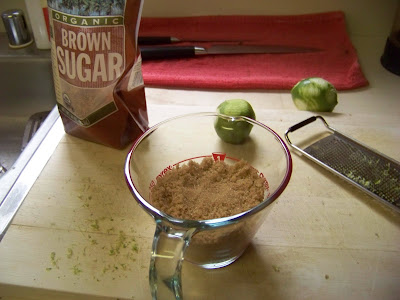 I juiced the two limes and added the juice to the sugar and butter in the pan. 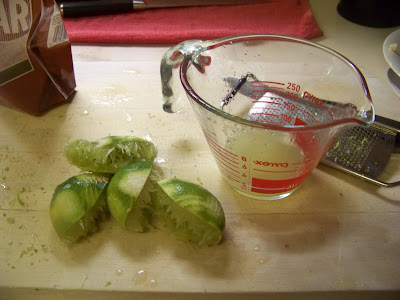 I added a tablespoon of honey to the sugar, butter, and lime juice in the pan. 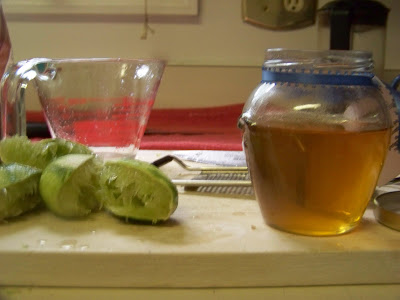 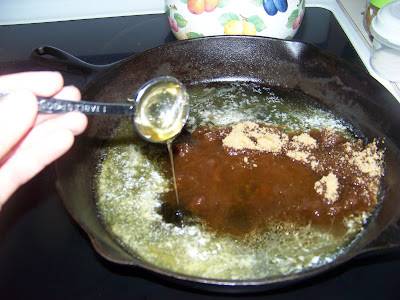 Then I let the mixture simmer on low heat until the sauce thickened. 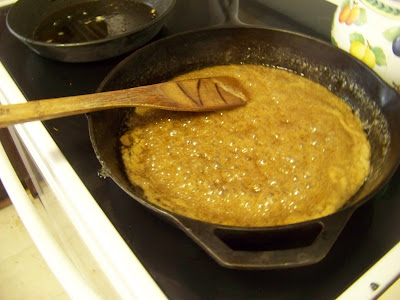 While the lime caramel simmered in the pan, I started on the batter. First I beat six tablespoons of softened butter in my stand mixer until it was creamy. 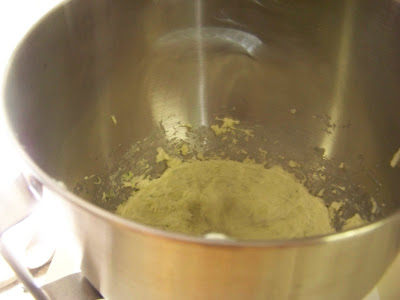 Then I added a cup of white sugar to the butter and beat that until it was creamy. 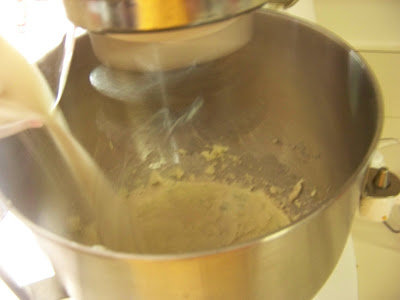 I added the lime zest (about one tablespoon) and two eggs to sugar and butter and once again beat it until it was creamy. (It's funny how hard we have to work over our food sometimes. I imagine the molecules with little black eyes. Oh boy. Don't mind me.) Then I added a half teaspoon of vanilla extract. (Usually I scrape the seeds out of half a vanilla bean, but I couldn't find any in the cupboard, which is always overflowing with spices, some of which I don't use because I bought them in the heat of excitement over something or other). 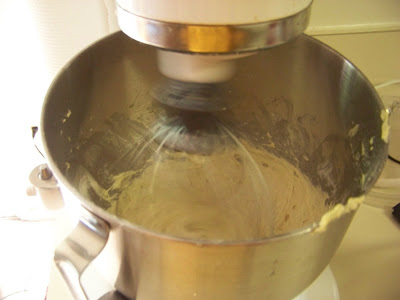 Then I mixed one and a half cups of all-purpose flour, two teaspoons of baking powder, and a quarter teaspoon of salt in a bowl and measured out a half cup of milk. I proceeded to alternate adding milk and flour mixture to eggs, butter, sugar, etc. in the bowl. (About three measures of each and at low speed, otherwise the flour will fly up into a cloud and make you look like an old man, which is of course not a problem if you are an old man, but I am not yet, so I avoid it.) 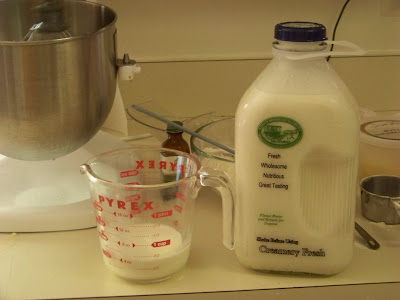 The next step was to add the peaches to the caramel mixture in the pan. (I used frozen peach slices left from last year--there were about two peaches worth in the bag. The texture of the peaches was pretty mushy, so I would recommend fresh peaches or other fruit.) 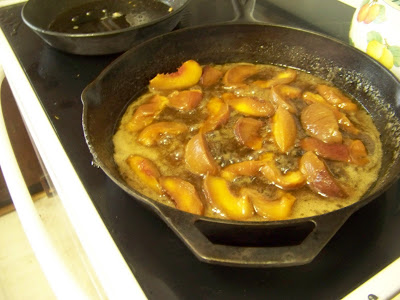 I poured the batter on top of the peaches. Poured is generous, more like scraped and smeared. This batter is not runny, and it's not supposed to be. Try to spread it evenly over the fruit and caramel in the pan. (By the way, if you don't have a cast-iron pan, you can do this in an eight-inch cake pan. Just start your caramel in a thick-bottomed pan on the stove and then pour it into your cake pan. However, I think that you should run out and get a cast-iron pan; they are cheap, last forever, and incredibly wonderful to work with if you get a good season on them. Like now. Go. Run. I will wait for you.) 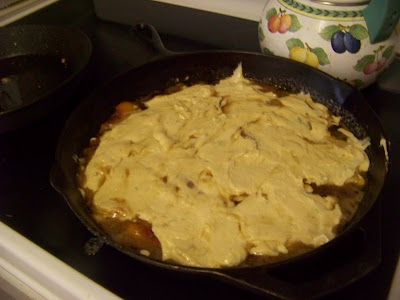 Put the pan into a 350-degree oven and set the timer for one hour and five minutes. Now, if you use eggs that you can trust, gorge yourself on every last morsel of batter that you can scrape out of the bowl. I literally made some kind of grunting Neanderthal noise while trying to shove my face into the bowl (with little success) to get every last molecule of this batter. It's that good. No. Really. Trust me on this.

OK, when the timer went off an hour and a half later I pulled the cake out of the oven (it turned out a little darker than usual, I probably should have pulled it out a little earlier). I placed the whole pan on a rack to rest for 30 minutes. Dum de dum de dum de dum. Twiddling fingers. Pacing. 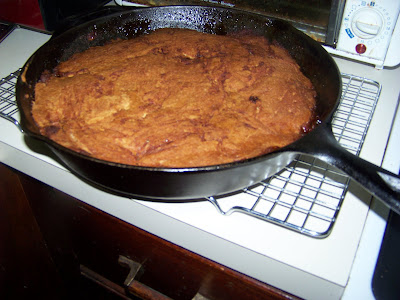 Finally, it was time for the great reveal. I scraped around the edges of the cake with a butter knife to loosen it, and holding a plate on top of the pan, I flipped it over. I pulled up the pan. Nothing on the plate but a couple of crumbs. Hm. OK. Scrape around the edges again. Do the flip thing again, and, don't laugh, the thing comes out in big broken chunks. 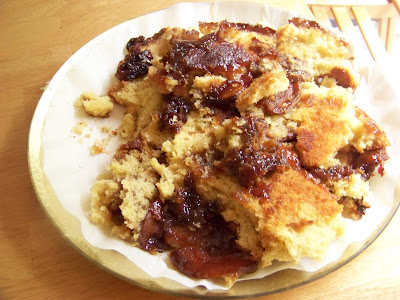 Damn! Typical! I have made this cake so many times, and it has come out beautifully every time. The one time I want to show it off to the world, it turns out a big mess. Oh well. It tastes great. I am pretty sure it turned out such a disaster because the fruit was so mushy. If I had used fresh peaches (and perhaps more of them), it would have been beautiful.

Notes on the source recipe: For this recipe I eliminated the cinnamon that is usually added to the flour mixture. I didn't think that lime and cinnamon would be a happy combination. I also added lime juice to the caramel mixture. When I make this recipe with other fruits, I generally follow the recipe as is, minus the almond extract. I like almonds, but I've got a thing about almond extract and other almond-scented stuff. It just gives me the willies. I know, weird, right. Well, everyone has their hangups. I also detest celery and do all I can to avoid it.
Posted by Tora Estep at 6:31 PM